Ive waited a while to write my review on Virginia Beer Company (VBC) to give it time to cool down and iron out its own mark here in Williamsburg and the Virginia Craft beer scene. Now that they’ve been open a few months, they’ve definitely lived up to the expectation and hype that was anticipated in the long months before opening.

First I’d like to talk about the crew. They’re an extraordinary crew that has deep roots within the City of Williamsburg, William and Mary and the craft beer scene in VA. Their tap room managers Luci and Michael hail from the well acclaimed brewery, Alewerks. They have exceptional knowledge of craft beer and the business of craft beer. Not to mention their fans and connections. This is very friendly and inviting environment for all ages and combinations of people. (Although I still get strange looks when I bring my 4yo in, thats a different blog)

Since VBC has opened the crowds that they attract has effected the crowd at Alewerks (another brewery in Williamsburg), creating two different dynamics. Because VBC is so versatile in the wide range of people they attract, they have allowed craft beer to become available to all. VBC is not exclusively a city secret or a craft beer drinkers “Brew-Trail”  secret. Their location right off of 60 between Newport News and Williamsburg and across the road from Busch Gardens, you will find all walks of life coming through the doors. Making people watching an added bonus to this brewery.

The brewery is an old auto shop, the taproom taking up the front quarter with an old industrial vibe. It features high ceilings and large windows into the brew house. The brew house has plenty of room for growth and potentially tripling the barrels they currently have. The tap room features the bar in the corner with stools and a designated place for ordering if you choose not to sit at the bar. Their are plenty of tables high and low with table tops from an old farmhouse (note: don’t wear a knitted sweater lol). A large chalk board shows the beers available  along with their ABV. 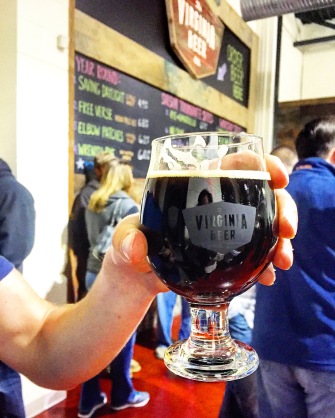 Pets are not allowed in the taproom which brings me to the Beer Garden. Leashed pets are allowed on the beer garden patio. VBC has a large roll-up garage door that brings the outside in on nice days and fire pits to keep you warm on chilly days or nights. Corn hole is also available to keep you entertained and there is a spot for food trucks to pull right in. An added bonus: smoking of any kind is NOT permitted. To be family friendly you have to strive for family friendliness and as a mother smoking of any kind is harmful which makes VBC a comfortable place for my family.

What VBC has been able to offer the city of Williamsburg allows them to really stand in with the big boys. They to offer a rotating food truck every day they are open. They are also featured in steal the pint nights, various festivals/events, beer events and they’re even on tap at Busch Gardens! The marketing execution has been spot on and It seems I cant go anywhere these days without seeing VBC! VBC also features a new beer weekly. Yeah you read that right, weekly! On Fridays they feature a brewers pin that is an infused beer or blend with limited availability.

So now lets get to the beer!

VBC’s brewer formally brewed for Sweetwater Brewing Company, a nationally known brewery . He came to VBC to uptake the brewmaster position where he has brought to life a clean and crisp pallet of beer varieties. There are four year round beers from all families;  wheat, IPA, Stout, and a Dry-hopped amber. They also premier a saison tournante series which features a refreshing farmhouse taste, sure to quench thirst on a summer day. You can expect to find a rotating farmhouse beer with tastes of citrus and floral hints to bring your back to that ‘fresh cut summer grass’ memory in this series. Finally there is the workshop series which is a small batch of sessions and black IPA’s.

Craft beer drinkers know that the beer is in the water. Williamsburg offers ‘colonial’ water and it is an acquired taste if your use to filtered water. This taste is enough to provide a unique and distinct taste. However, VBC’s beer has a very clean taste which is perfect to offer infusions for the different small batches.

Now that the summer is upon us and its time to drink up! Check VBC out on their Facebook , Website, and Twitter or visit them in Williamsburg : 401 SECOND STREET, WILLIAMSBURG, VA 23185 USA

All VBC beers can be found on the app Untappd